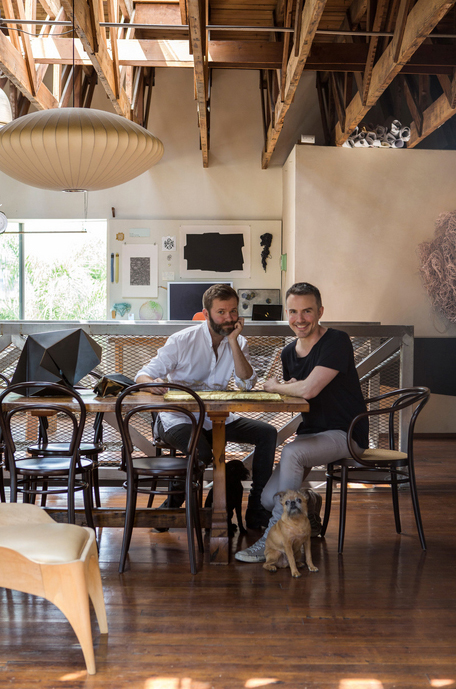 In Watts, Turning an Old Light Bulb Factory Into a Home

“We’re making the sprawl work to our favor,” says Andrew Paulson, a self-taught weaver and one half of the Los Angeles-based design duo . Paulson and his partner in life and work, the ceramist Sean Dougall, live in Watts, a neighborhood that’s recently begun to show signs of a renaissance 50 years after the 1965 riots, thanks to chefs like Roy Choi and Daniel Patterson, who are opening a new restaurant there later this year, and Frank Gehry, who is set to collaborate on a local community center for the Children’s Institute Inc. “People ask us, ‘Is that the new neighborhood?’” says Dougall, noting the 75 blocks that separate Watts from downtown’s flourishing arts district. “We’re not feeding off of an existing art scene. We’re trying to build our own visual language, on an island.”

In 2011, Paulson and Dougall found their way here — to a renovated lightbulb factory that serves as their living quarters and workshop — by total chance. “I had been looking — not even for a place, actually, just looking around Craigslist,” says Dougall, whose aptitude for online scouting has yielded much of their décor, including a velvet, blue-gray 1950s Paul McCobb-style cocktail sofa and a vintage Indian dhurrie rug. With 12-foot ceilings, exposed wood beams and ample skylights, the 2,300-square-foot solar-powered space (with a 4,000-square-foot roof deck) is an artist’s work-home dream. Filled with industrial elements, midcentury statements and contemporary art by friends such as the German fiber artist Nike Schroeder, the space is finished with a cinematic soundtrack: the recurring rumble of the Metro’s Blue Line, which runs eye level and just outside their second-floor windows.

Soon after they moved in, Paulson left his job as a literary agent to pursue the duo’s creative partnership full time (Dougall previously worked as a production designer on events such as Prince’s 2007 Super Bowl halftime show and the 2008 National Democratic Convention). “There was something about coming here; suddenly doing work apart — or anywhere else — was hard,” Dougall says. They devoted themselves to their debut collection of 10 decorative pieces, called Dark Matter, which they showed at West Hollywood’s Therien Gallery in spring of 2014. Standouts included “Supernova,” a drawer-less, 300-pound bronze and white onyx writing desk equipped with both a dimmable LED light and a 1950s school desk-styled pencil dimple, which has become something of an emblem of the pair’s retro-futuristic style. After Dark Matter’s debut, sales poured in from collectors such as the designer Oliver M. Furth and the antiquarian Joel Chen of the influential showroom JF Chen. Next, Dougall Paulson will unveil Spectrum, a capsule collection of weavings made from jewelry-grade metals, opening at the gallery Blackman Cruz this week. “Light is more of a thrust for us now, and that’s where these fit in,” Paulson says of the reflective works, treated with mineral oil in order to slow, but not stop, the aging process. “It’s about putting as much material in a square inch as possible and really exploding the surface — to both capture and emit light.”

Their next, and second, full collection of furniture, scheduled for mid-2016, is already well underway. It will include pieces like a 36-inch-by-48-inch cast bronze “moonscape” coffee table with a topographic surface. They’re still in the research and development phase, with evidence of experimentation everywhere: both successful (an array of scepterlike objets d’art sculpted in balsa wood and bound with found materials) and not: a foray into porcelain extruding was deemed too “Anish-y,” referencing the artist Anish Kapoor. To be clear, they’re fans of Kapoor; but any sign of the derivative triggers an internal alarm. “It’s about finding a form that is brand new, creating work that is different and trying to explore materials that push boundaries,” says Dougall.